Sofa by John Henry Belter, 1856, from the V&A collection 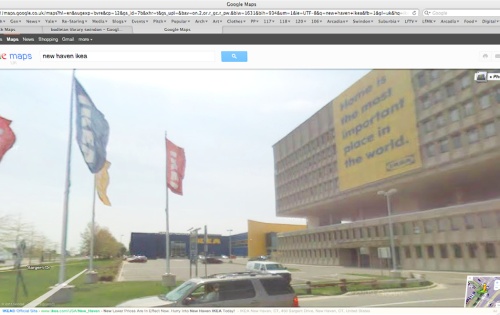 In ‘Why I write’ (1946) George Orwell stated his four reasons for writing were sheer ego, aesthetic enthusiams, historical impulse and political purpose, in that order. This seems an appropriate summary of why we design. Assuming your ego can take care of itself, this first brief will start by focusing upon your aesthetic enthusiasms. It is a short, intense design exercise to encourage you to declare your aesthetic preferences, explore their relevance to the studio’s aims and create a touchstone for your main design proposal.

BRIEF
You are to design, draw and model the entrance for an open-access repository (approx. 12,000sq.m) for a London-based, public institution to be built on an undefined site on the peripherary of a UK town. The design should sample:

1. an established London-based public repository
2. an object from its collection
3. a New Haven Big Box retail store
These elements should be synthesized to create an entrance that:

a. is an appropriate symbol for the institution – how might it be read and experienced by different audiences?
b. communicates with its public(s) – who are the intended, and likely, publics?
c. defines the nature of access to the repository – singular/multiple, exclusive/inclusive, homogenous/heterogeneous?
d. establishes your personal lexicon for sampling and synthesizing

The entrance will be presented as:
I. a series of tracings
black line hand drawings that record your initial 2D sampling and synthesizing
II. a series of studies
views of 3D digital models of initial samples, different combinations and physical material explorations
III. a physical model
to scale, fabricated from relevant materials, using appropriate tools e.g. rapid prototyping, CNC routers, etc
IV. a 500 word summary of your approach

SAMPLING
For most of its history architecture has been a referential art, its protagonists sampling elements from existing buildings and synthesizing them into new  combinations. At some point in the 20th century this approach was deemed unacceptable by the architectural establishment. The modern masters kept their historical samples quiet and the next generation was too focused on the future to use the past. As a result many contemporary architects lack the historical knowledge, techniques or language to continue architecture’s tradition of formal evolution.

In creating an open-access repository we have few architectural precedents to inform our approach. Sampling is an engagement with an existing world, a world that is familiar, has been experienced and defines our memories. By sampling
elements from both the traditional institutions and the contemporary contexts they are soon to inhabit, we create the opportunity for the new proposals to be instantly familiar and appropriate, to tap into and to engage with cultural
memory. The public repositories that we are studying have their own spatial identity that significantly influences the way in which their collections are experienced. The artefacts that fill these repositories have their own unique formal qualities, loaded with associations and significance. Prior to our field trip these must be sampled from afar, reducing the act of sampling to a purely visual act. The limitations of this technique should be embraced, honing our visual sensibilities to learn the shapes we are sampling and understand the significance of their forms.

ENTRANCES
Entrances to both viewing spaces and secure stores are frequently singular and secure, celebratory and symbolic. In many ways they are a mirocosm of the contradictions that lie within the building brief for an open store. Developing designs for a new entrance, or new entrances, offers the opportunity to suggest a significantly altered relationship between public and artefacts, external communication and internal use, secure gateway and inclusive threshold. In the careful selection of samples a distinct character can be established for the entrance, a declaration of intent for the new building. Many of the existing repositories use narrative elements intheir entrances and this should be analysed, sampled and reinterpreted as necessary.

MAKING
The process of fabricating the proposal requires the careful selection of appropriate materials. Given production will be based predominantly on visual sampling the emphasis will be on the materials’ symbolism and associations rather than their haptic qualities. The models should be at an appropriate scale to describe the key intentions behind the proposal but ambiguities in the perceived scale of the autonomous artefact should be enjoyed and embraced as a creative stimulus. The review of the final models offers an opportunity to explore the relationship between viewer and artefact that lies at the heart of the studio’s project. Consideration should be given to the conditions for the review, the performance of the review and the nature of the engagement between the viewer – critics and peers – and the finished artefact.