2A Sampling An Encounter

Upon visiting Ikea as an observer, I was stuck by how people occupy mock-up spaces within the show room as if they were their own.  It’s almost as if they are taking the spaces for a test drive before buying.

With this drawing I was interested in exploring and depicting how people interact with the mock-up spaces and also how bizarre it is to observe people acting out roles in adjacent spaces. 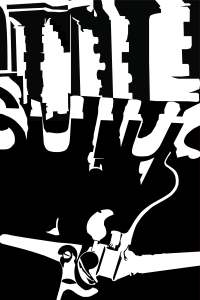 By abstracting the forms of the Armouries, the IKEA sign, and the gun action, the three dimensional objects are flattened and treated at ambiguous scales. This ultimately flattening effect was not quite suggestive of an entrance’s spatial qualities and affects.

The components of the gun were broken apart and arranged in relation to the other objects. The composition of the objects on the page in the second drawing is intended to lead the occupant/viewer to a single point on the page. The larger frame of the elements resembles a gun barrel.

This drawing combines the section of Sterling’s Clore Gallery at the Tate Britian, Tony Cragg’s sculpture Cumulus, and the blue cladding and utility objects of the New Haven Ikea Store.  These elements are combined into one section/elevation and reduced to a similar scale to be read as continuous and ambiguous building-scape with the Ikea elevation placed between the Tate Britain building and a fragment of the Cragg Sculpture acting as an adjacent building to the Ikea/Clore Gallery Curtain wall. The black figure of this drawing treats the sculpture and section as synonymous in the articulation of the space while the same pieces, when displayed within a box frame of the curtain wall as merchandise, become the focal point. This drawing redeploys the utility objects on the Ikea store, which are placed there for purely functional purposes, and repeats and scales them to become purely graphic objects.  We’ve talked about the overly articulated Sterling section as something that is not seen in experience of the museum, while in contrast, the vastness of the simple box is something incredibly visual and experienced.  I’m interested in this unexpected relationship and readings between these two types of form with respect to its intended purpose and the misuse of the objects (whether utility, art, or merchandise) when juxtaposed and placed in its unintended space.

this drawing was an attempt to reconcile circular objects from IKEA, the V&A, and their respective collections into an arrangement that mimicked the main entrance into the V&A. moving forth, i may or may not use these objects, but the drawing helps me to declare an interest in the tension between flatness and depth. This sampling began as an interrogation of the structure of books. While collecting imagery from the vast archives of the British Library, unconventionally constructed or novelty books quickly emerged. Examples included the world’s largest book (an atlas), traditional oriental scrolls and secret letters transmitted in the ends of quills. One of the most striking, idiosyncratic examples is the catalog of Edward Gibbon’s library. This improvised, literal “card” catalog is composed of several decks of playing cards with call numbers scrawled on their blank backs. When opened, the book reveals its internal structure through the faceting and peeling of exposed layers of cards. The distinct shape of the book is recorded as a profile line, with further delineations revealing the cards composing the open page.

This part-to-whole relationship was next identified in the architecture of the British Library, a building which utilizes cascading forms and asymmetries in order to diminish monumentality. In the case of Ikea (our selected “Big Box”), the part-to-whole relationship explored is the entry sequence, particularly the pavement markings delineating the entry sequence. Like the library, an acknowledgement of entry and scale is made, but through commercial architecture devices of flatness and artifice.

The objects have been sequenced in their order of discovery, inviting comparison between them. Compositionally,  they sit on the page as disparate objects in a sequence that most convincingly unifies their elements. The subtle differences found between the objects suggest territory for further exploration, including the dynamism of the object based on the viewer’s perspective, layering through form and material and slipping or cleaving as an indicator of entry.

New Drawing, after tutorial.  Original drawing is Objects. The drawings uses three  items that have been re appropriated from there original context to create a  new foreign object.  The object is intended to invite the observer to explore and potentially uncover or construct  its “history” upon closer examination.  This parallels work done by archaeologist and academics at the British Museum who must recreate objects and speculate histories using only fragments or parts of an object to recreate the whole and the story.  The silhouette furthers this ambiguity of the object.  Furthermore, this is an underlying theme of repetition that stems from the repeating nature of each of the original objects sampled.

This drawing explores the relationship between profile, puncture and pattern making.  Elements from the Tower of London, Ikea and the Royal Armouries collection are combined.  These elements are allowed to flow into each other to subvert and form new readings of these forms and their potential uses.  The windows from the Tower of London make up half the openings of the eye holes in the helmet.  The profile from the Tower of London creates a new profile to the top of the helmet.    The “e” and “a” from Ikea articulate the lower half of the helmet.  The pipes from Ikea are scaled and rotated to form a pattern.  In translating this drawing to 3D I will attempt to maintain a dominate and readable profile that is then articulated with a patten created through the manipulation of multiples.  Ideas of a layering will also be important in creating an entry sequence that relates the Tower of London to Ikea.    Finally I’d like to reintroduce some of the tension found in the initial tracings and in the mission of the Royal Armories as a holder of weaponry while promoting non-violence.

This drawing combines the Klencke Atlas (the world’s largest book), a porthole view of the British Library, and a constellation of hanging IKEA lamps.  A series of layers establishes multiple readings of the drawing, with elements simultaneously reading as flat and three dimensional.  The circular form that unites all three objects is used to mingle identities, as atlas and porthole begin to read as floating lamps and vice versa.  This interest in layered depth and multiple readings stems from the nature of all books, small and flat objects which contain entire worlds within them.